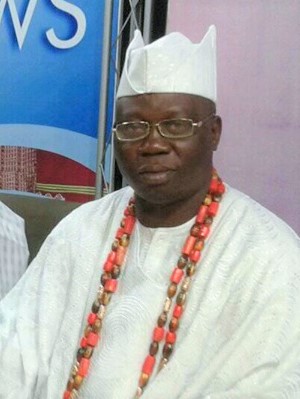 He said the power sector has the potentials to change the poor narratives of the Nigeria’s economy.

The Aareonakakanfo also pointed out that there is need to reorientate the Nigerian youths on the need to cultivate new capacity development culture, by learning various vocational trainings in order to build prosperous careers.

Adams made the this known on Tuesday when the Nigerian Institute of Building (NIOB) paid a courtesy visit to him at his Omole Phase 2 residence in Lagos.

The group, led by the National President, Builder Kunle Awobodun, visited the Yoruba generalisimo to seek his blessings and advice on national security and other relevant issues.

“Inadequate power supply is a fundamental problem. When there is stable power, the economy will be stable for innovative ideas”

“We say there is no jobs,our youth are not employable with their certificates, yet foreigners have taken over our construction companies,and other areas”

“The Federal Government, as well as the state government must create educational institute for technical development”

“We also need to re-orientate the youths on the need to acquire a practical -based knowledge and jobs.

” We need secondary and university for technical schools, at least, four in each of the local governments in each states. We need to add value to the lives of our youths. They need to learn about technical jobs. This is the future of great nations”

Adams,informed that he started his life as an artisan, also admitted that the reduction in the number of artisans, and experts have increased the number of political thugs in Nigeria .

“People no longer interested in becoming an apprehentice. They want to make quick money and that is affecting the economy adversely
and sadly, the best artisans,builders are from Togo, Republic of Benin and other African countries”

Adams, however, urged the group to to embark on aggressive mobilisation, stressing that the group has the potentials to build a formidable structure that can be used to project the group’s image.

Responding, Awobodun said the group has made tremendous impact in ensuring construction of quality and standard buildings across the country.

He explained further that NIOB is a group with great strength and a national outlook, with structure across all the states in the country.

The NIOB President also expressed concern on the increasing cases of building collapse across the country, saying the group has made concerted efforts to ensure safety and ensure that construction are done by using quality building materials that can endure the test of time.

He also seek the support of the Aareonakakanfo in ensuring effective security of members across the country,adding that the group would embark on a sensitization rally to tell the world about the activities of the group.

“We are organising a sensitization rally on March 16 to tell the world about our various activities”,
Awomodu said.

Some of the members of the group that visited the Aare Onakakanfo included:Builders Modupe Ogunbanjo, Femi Ishola, Jane Ogbu, Prince Adesegun Banjoko, Comrade Anthony Aluko, Oyebamji Dauda and Adesina Ogunkoya among others.