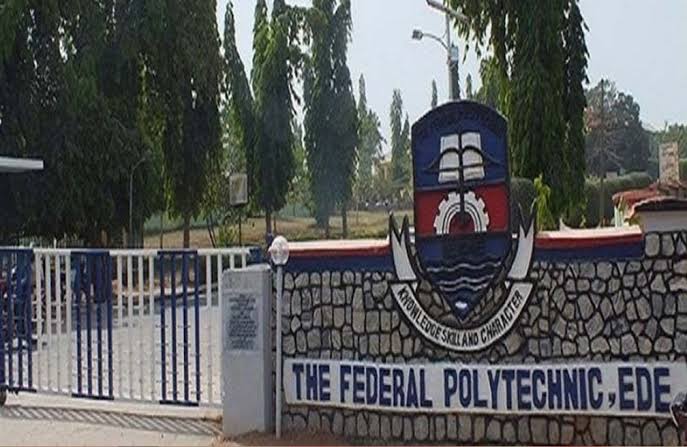 A human rights activist, Comrade Adeniyi Alimi Sulaiman has asked the
embattled Rector of the Federal Polytechnic, Ede,Osun State, Mr. John
Taiwo Adekolawole, to step aside from office honourably over the allegation of gross misconducts leveled against him  by the ASUP Chairman of the Polytechnic, Mr. A. Masopa recently.

He stated that the call became imperative as a way to pave way for independent investigators to investigate the mirage of allegations, bordering on plagiarism, abuse of office, nepotism and other grave
offences leveled against Adekolawole.

This was contained in a signed statement by Comrade Sulaiman and copies were made available to newsmen on Tuesday, alleging that Adekolawole had committed grave offences in the service of the
Polytechnic which made him to change his surname from Edaogbogun to Adekolawole because he had earlier been barred from holding any duty and sensitive position in the citadel of learning, adding that
Edaogbogun (now Adekolawole) was alleged to be barred through a letter
titled: SUSPENSION WITHOUT PAY AND REMOVAL FROM DIRECTORSHIP AND
HEADSHIP OF THE SCHOOL OF APPLIED SCIENCES AND DEPARTMENT OF
LABORATORY TECHNOLOGY RESPECTIVELY,

The statement added that the current Rector of the Federal Polytechnic,Ede,Mr. J.T. Edaogbogun (as he then was) changed his
surname to present Adekolawole when he realized that the name
“Edaogbogun” could not be allowed to occupy any position of
responsibility in the Polytechnic community because Edaogbogun had
been used to perpetrate evils as a Lecturer in the year past in the Polytechnic which made the disciplinary Committee of the institution to suspend him without pay for two session and as well removed him from Directorship and Headship of the School of Applied Sciences and Department of Science Laboratory Technology respectively over what they termed as “Gross Misconduct’ as contained in a Letter dated 1st November,1995 with reference number:-FPE/99/01/117 and signed by the then Registrar of the institution,F.C. Mordi.

Sulaiman who is Executive Chairman, Centre for Human Rights and Social
Justice (CHRSJ) further alleged that Adekolawole had involved in the
financial mismanagement of the School funds to the tune of Sixty million naira (N60, 000,000), noting that the rights group (CHRSJ) had concluded arrangement to forward a Petition Letter to the nation’s
anti-graft body for alleged financial mismanagement and other sundry
issues against Adekolawole.

According to the statement; our investigation revealed that Mr.
Edaogbogun Adekolawole led management team of the Polytechnic in collaboration with the Polytechnic Governing Council Chairman, hired ADMUHAM Travels and Tours to organize illegal retreats for few members of the Governing Council where the sum  of Forty million naira (
N40,000,000) were approved and withdrawn from the Polytechnic treasury in less than twenty- four (24) hours as reflected in the two internal memory double dated 12th February,2020 with reference number: FPE/R/CA/REC/26/375&376 respectively.

Also, through internal Memo dated 30th January, 2020 with reference
number:-FPE/REC/PRO/308, the Rector approved illegal sum of Eight
Hundred and Ninety Thousand, One Hundred and Eighty Naira (N891,
180.00k) for air ticket, hotel accommodation and transport fare for
the wedding ceremony of the younger brother of the Council Chairman in
Sokoto State and Rector approved the same Air ticket fare for his wife, Mrs. Olukemi Adekolawole and many more of financial scandals.

It would be recalled recently in the media that the Rector of the Federal Polytechnic, Ede, has been alleged to have enmeshed in series of allegations of violating the extant laws guiding the regulations of
the institution by the Polytechnic ASUP Chairman, saying that since Adekolawole became Rector, his tenure has been characterized with lopsided appointment, indiscriminate issuance of queries, nepotism, disobedience to the extant rules and others.

Part of the reported allegations against the Rector in the media, were; on December 11,2017, few month after his appointment as Rector gave his wife, Mrs. Olukemi Adekolawole,what can be regarded as triple promotion.Although, the Rector had refuted all the allegations of gross misconducts leveled against him by the ASUP boss

Tension in Ede Poly, as union accuses Rector of infraction, abuse of power

There is palpable tension at the Federal Polytechnic, Ede, Osun State, over an alleged infraction perpetrated by the Rector, Dr John Taiwo Adekolawole.

He was accused of dishing out repressive and Draconian directives targeted at members of staff, particularly the academic staff of the polytechnic, among many other allegations.

According to Mr. A. Masopa, the Chairman of Academic Staff Union, Federal Polytechnic, Ede chapter, in an interview with DAILY POST on Monday, the Rector is notorious for indiscriminate issuance of queries to perceived ‘enemies,’ as well as giving lopsided appointments and nepotism.

He alleged that the Rector, against the extant law of the institution and administrative procedure, unilaterally gave an unmerited promotion to his wife.

ALSO READ  Uwa and Barakat’s Murder: Viewpoint of a Criminologist By Oludayo Tade

He, therefore, substantiated his claim by producing a letter, which indicates that Mrs Adekolawole was promoted from CONTEDISS 7 to CONTEDISS 9 and backdated to January ,2017, while the financial benefit started from January 2018.

“On December 11, 2017, few months after his appointment as the Rector, Dr Adekolawole gave his wife, Mrs Olukemi Adekolawole what can be regarded as triple promotion”, Masopa lamented.

Meanwhile, another letter sighted by our Correspondent revealed that Mrs Adekolawole ought not to have been promoted in July, 2017, due to what the junior staff Appointment and Promotion Committee described as ‘inadequate qualifications’.

A member of the management, who craved anonymity insisted that Mrs Adekolawole did not merit the promotion given to her by her husband, as she had not added any qualification as at the time she was promoted.

The source further revealed that the promotion committee was supposed to sit on her matter and should not be a unilateral decision of the Rector.

In his reaction, (obtained from Daily Post) the Rector said his wife was promoted in line with the administrative procedure of the institution.

“For your information, my wife was duly promoted. She is now a Chartered Accountant, and she is even on level eleven. We are going to do next upgrading, those with ICAN will be promoted,” the Rector said.