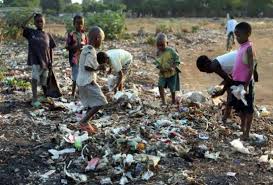 28
SHARES
321
VIEWS
Share on FacebookShare on TwitterShare on WhatsApp

The 2019 report by a non-governmental organization, Oxfam International has ranked Nigeria low on poverty eradication and gender equality.

According to the report, 69% percent of Nigerians live below the poverty line.

This was disclosed by Oxfam Country Director, Constant Tchona, during a media briefing in Abuja, on Tuesday.

Although, Oxfam affirms Nigeria’s economic growth in the last six years, it describes the growth as a paradox, saying it does not reflect on the living standards of the citizens.

“The gap between the rich and the poor may be a worldwide problem but in Nigeria, the scale of inequality is staggering. Nigeria is the only oil-producing nation in the league of five countries with the largest highest number of poor people.

“Although the country’s economy has expanded at an average of 6% every year since 2016 the paradox of growth in Nigeria is that as the country gets richer, more than half of its 200million strong population continue to live in abject poverty.

“This index reveals that 69% of Nigerians are living below the poverty line. The report also reveals that Nigeria ranks 125 out of 145 countries on the gender inequality index,” Tchona said.

The organisation also decried the level of inequality in Africa, particularly West Africa.

“Inequality is at crisis levels in West Africa. While a small but growing number of people are becoming fantastically rich, the vast majority are denied the most essential elements of a dignified life, such as quality education, healthcare, and decent jobs, despite remarkable economic growth driven by extractive industries.”

According to the organisation, “Five of Nigeria’s richest men have a combined wealth of US$29.9 billion – more than the country’s entire national budget for 2017. However, about 60 percent of its citizens live on less than US$1.25 a day, the threshold for absolute poverty.”

As part of its recommendations, Oxfam urges the Nigerian government to critically re-examine its policies, the culture of governance and make deliberate efforts to break the concentration of wealth in the hands of the .