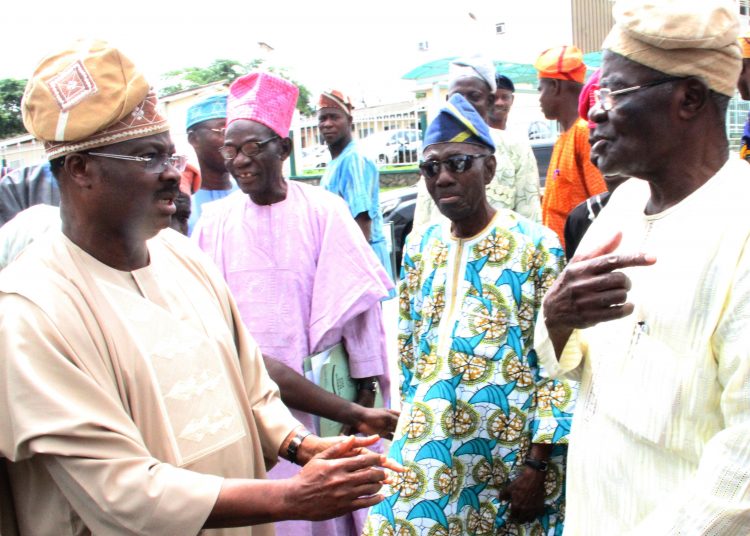 L-R: Oyo State Governor, Senator Abiola Ajimobi; Elder Dayo Adeola; a former state Commissioner for Information, Chief Timothy Jolaoso; and state Chairman of the All Progressives Congress, Chief Akin Oke, during a visit by leaders of the APC in Ibarapa land to the governor, at the Governor's Office, Ibadan... on Monday. Photo: Governor's Office

222
SHARES
329
VIEWS
Share on FacebookShare on TwitterShare on WhatsApp

FOLLOWING the dust raised by the nomination of the immediate-past governor of Oyo State, Sen. Abiola Ajimobi as the All Progressives Congress (APC) deputy national chairman, (south), the party has lashed out at those that betrayed it during the last election in the state, describing them as blackmailers seeking undue recognition.

The Oyo State chapter of the party, on Monday, in a letter written to the national chairman of APC, Adams Oshiomhole, and signed by the chairman of the party in the state, Chief Akin Oke and various executive of the party, added that it has been inundated with the nefarious activities of some opportunistic elements and fifth columnists who were disturbing the media space with periodic tantrums in the name of attracting undue attention to themselves as political players.

The party said these political clowns would stop at nothing to rock the boat of Oyo APC from a distance since they were not part of the family again having left to join other political parties at different times, adding that the latest in the series of their shenanigans is the unpopular stand on the nomination of Sen. Ajimobi for the post of the deputy national chairman (South) of the party.

The letter added: “For some of them who were with us at one time or the other and those political neophyte being coopted into the script, it is simply an act of betrayal against the person of Sen. Ajimobi.”

“As it is not in our character to profile any funny character under our roof, we cannot always help the situation when it is “black sheep that comes forward to reveal his status as a slave within the clan”. The build-up to the crisis which engulfed Oyo APC in 2018 was the handiwork of some enemies within who were indulged for too long by the leadership of the Party. The few agents of ‘mutiny’ acted to destabilize and weaken the Party for the benefit of only themselves and some external forces without checks despite availability of damning evidence against them. No thanks to the magnanimity and the forgiving spirit of our Leader, Sen. Abiola Ajimobi who kept preaching tolerance.”

“In the end, the same divisive elements forced their way out but not until a sacrilegious plan to fractionalize was hatched and nurtured in what was called Unity Forum. The same promoters of Unity Forum partially succeeded in blackmailing the then Gov. Abiola Ajimobi, Chief Akin Oke, President Muhammadu Buhari as well as the national leadership of the APC in their bid to justify a plan to sabotage the Party in the 2019 general elections. They were able to get sponsors from outside the state and with heavy funding, they made spirited efforts to give the dog a bad name so as to hang it.”

“The then Minister of Communications, Mr. Adebayo Shittu, teamed up with serving federal lawmakers who included Sen. Monsurat Sunmonu, Sen. Adesoji Akanbi, Hon. Sunday Adepoju, Hon. Adedapo Lam-Adesina, Hon. Abiodun Olasupo, Hon. Taiwo Akintola, Hon. Olusumbo Olugbemi, Hon. Olatunbosun Oladele as well as the like of Alhaji Fatai Ibikunle, Isiaka Alimi, Engr. Raufu Olaniyan (now the deputy governor of the PDP government in the state), Dr. Kola Balogun (now a PDP Senator), Dr. Adebayo Adewusi, Prof. Adeolu Akande, Mr. Wasiu Olatubosun (now a Commissioner in the state under the PDP government) among others. Most of these people later joined the PDP, ADC or ADP and it is on record that they all worked vigorously against the APC in the last general election. Apart from Senators Akanbi and Sunmonu, all other renegade federal lawmakers contested against our (APC) candidates and lost woefully in the same election. Thus, they exposed themselves as lacking in electoral value.”

“Therefore, it is a height of immorality and shamelessness if this unscrupulous set of individuals can still seek to mislead the public by claiming to have any stake in the APC even when there is no record of their readmission into the Party anywhere after the conduct of the 2019 general election.

“Funny enough, some of them held on to key appointments as chairmen and members of Federal Boards as well as Heads of agencies of the APC Federal Government after cross-carpeting to PDP surrogate political parties. In collaboration with some external forces which sponsor their rebellion, they did certain harms which resulted in the loss of President Buhari in Oyo State during the last election though with a slight margin. But in the end, we still won Two of the Three Senatorial seats and Nine out of the Fourteen House of Representatives seats available to Oyo State.”